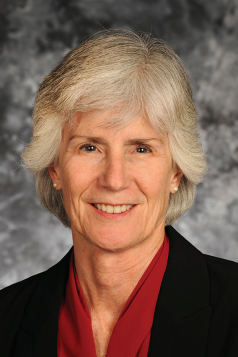 Dr. Marianne Walck provides strategic leadership, direction, and integration for research, science and technology at Idaho National Laboratory in her role as deputy lab director for Science and Technology and Chief Research Officer. Prior to joining INL in 2019, she was vice president of Sandia National Laboratories’ California laboratory. She has more than 30 years of DOE national laboratory technical leadership experience, including technical program leadership, research leadership, and line, personnel, and site management. As vice president of Sandia’s California laboratory, Dr. Walck was responsible for principal programs including nuclear weapons stewardship; homeland security with a focus on defending against weapons of mass destruction; combustion, transportation, and hydrogen energy research; biology; and advanced computational and information systems. Dr. Walck also served as vice president in charge of Sandia’s Energy and Climate Program, which encompasses a wide variety of energy technology programs including renewable energy systems and energy infrastructure, climate and engineered systems, fossil energy, nuclear and fuel cycle, and transportation energy systems. Earlier, she held a variety of research and management positions at Sandia. She served on the Sandia Research Leadership Team, created and led the Geoscience Research Foundation; was director of the Geoscience, Climate, and Consequence Effects Center; and was director of the Nuclear Energy and Global Security Technologies Center.

Dr. Walck serves on several advisory boards for universities and technical institutes, including the Texas A&M Energy Institute, and is a Senior Fellow of the California Council on Science and Technology. She holds memberships in the American Geophysical Union, the Seismological Society of America, the Association for Women Geoscientists, the American Nuclear Society, and the American Association for the Advancement of Science. She earned Ph.D. and M.S. degrees in geophysics from the California Institute of Technology and a bachelor’s degree in geology/physics from Hope College.

She and her husband have two sons. She volunteers as a mentor, and enjoys judging student science fairs and performing as a violinist in community orchestras.